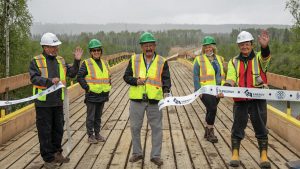 Recently, Coastal GasLink partnered with Nak’azdli Whut’en to open the largest freespan temporary bridge in the world, across Stuart River in northeast B.C.

The temporary bridge will help Coastal GasLink workers access remote sections of the 670-km natural gas pipeline project, according to a news release.

The bridge — which spans 770 feet — was given a thumbs up after Nak’azdli Whu’en’s Natural Resource Department and Chief Alexander McKinnon and council were assured it could be done safely, and with minimal disturbance to the river, salmon and fish habitat.

“I want our members to have clean drinking water, to be able to harvest salmon,” said McKinnon. “The best way to do it, I believe, is to be at the table with large industry folk that will listen to our concerns and take our concerns into consideration so we can help protect the wildlife.”

Instead of placing multiple pillars in the water, the bridge is a free-span arch, according to the company. Coastal GasLink will also be supporting the development of a fish hatchery project with Nak’azdli Whut’en to help increase salmon in the rivers which is a critical resource to the local residents.

The bridge is not publicly accessible and was completed prior to the salmon spawning season. It will be removed and the land reclaimed after CGL construction is complete.