The Waschuk Pipe Line Construction team (Waschuk) showed community spirit on July 8, 2017 by supporting efforts to eliminate child hunger. In partnering with the not-for-profit Brakemen Foundation (the Foundation) and supporting its “Zero Hungry Kids” campaign, Waschuk is helping to ensure that no child in the Calgary school system goes without nourishment during the school day.

The Brakeman Foundation was established in 2012 and is dedicated to ensuring children receive life essentials (food, shelter and a proper education) by funding local charities focused in these areas. As the Foundation has grown, so has its mandate — which has now been streamlined — and in January last year the “Zero Hungry Kids” campaign was launched. The long-term goal is to see Calgary become a flagship city for feeding every child from Kindergarten to Grade 6, who needs a breakfast, snack, or lunch throughout the school day.

The Brakemen Foundation first began fundraising by hosting individuals and companies at the Calgary Stampede’s GMC
Rangeland Derby – with all profits donated to children’s charities. And, again in 2017, that’s where Waschuk Pipe Line Construction Ltd. stepped in to sponsor a chuckwagon at this year’s event.

“For us, it’s a great night all around,” says Kevin Waschuk, vice president of Waschuk Pipe Line Construction Ltd. “We are able to support a great cause while getting the chance to experience the Stampede, have a fantastic night of entertainment and meet our driver, Troy, who really is a legend in this event.” 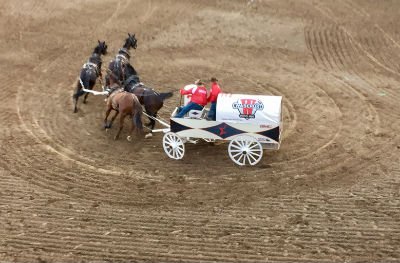 Waschuk is referencing Troy Dorchester, one of the most beloved drivers from one of chuckwagon racing’s quintessential families. Troy’s father, grandfather and uncle are also former Calgary Stampede Champions, making him a third generation elite driver. With a team of 17 horses (rotated in groups of 4) he is the only chuckwagon driver to have won the sport’s “Triple Crown,” consisting of the Calgary Stampede Rangeland Derby, the Calgary Stampede Aggregate Title and the Ponoka Stampede title in a single year (2012). On July 8, he placed second out of four drivers.

“The Brakeman Foundation does some great work,” says Waschuk. “We’re proud to be able to help them — for the second year in a row — towards their goal of seeing Calgary become the first city in North America to say it has zero hungry kids.”