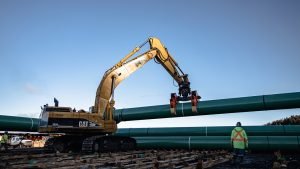 The single largest to-date private sector investment in Canadian history, the $40 billion LNG Canada project, continues to take shape near Kitimat and has surpassed the half-way mark. In 2021, roughly 4,000 workers were employed at the Kitimat site and 2022 is projected to be even more demanding for labour resources.

“We had an extremely busy year in 2021,” LNG Canada CEO Peter Zebedee said in a fireside chat, along with Haisla First Nation Chief Crystal Smith, at the final day of the three-day BC Natural Resources Forum. “We were able to reach some really key milestones.”

The companion Coastal Gaslink pipeline is now 60% complete as of late February 2022. When the LNG plant officially goes into production in three years, the LNG exported to Asia will have the potential to significantly reduce greenhouse gas emissions if used to displace coal power.

According to TC Energy, proponent-lead on the CGL project, once the Coastal GasLink project is operational, it will play an important role in the global energy transition. It’s estimated that natural gas exports facilitated by Coastal GasLink could reduce annual global CO2 emissions by 60-90 million tonnes, which equates to more than the total annual emissions of British Columbia and roughly 10 per cent of Canada’s annual emissions.

Positive relations with First Nations rightsholders have been critical to moving forward. For instance, the Haisla Nation is focused on extending contracts awarded to the Haisla for construction to the post-construction phase and plant operations. These opportunities will help raise the standard of living for the Haisla’s 1,800 members and provide long-term revenues.

At the Forum, Chief Crystal Smith noted, “We’re constructing an apartment complex on reserve. We were able to purchase eight buildings within the municipality of Kitimat to provide affordable housing to our members. And … for the first time in our nation’s history, we have a culture and language department, where the mandate is to preserve what’s existing and be able to have that learning opportunity for future generations.”