October 6, 2017 – Members of the Pipe Line Contractors Association of Canada (PLCAC) are disappointed with the announcement by TransCanada Corporation that they will not be proceeding with the proposed Energy East Pipeline Project.

“This is very disappointing news for our association and its members,” says PLCAC Executive Director, Neil Lane. “From the beginning, the PLCAC and our four union partners have been proponents of the Energy East Pipeline, ensuring thousands of Canadian workers constructed this nation-building project responsibly and safely for all Canadians. The amount of time, energy, effort and good faith that has gone into the development process by the PLCAC and our union partners will now be a lost opportunity, adversely impacting thousands of jobs across Canada of those who would have built and maintained the pipeline”. 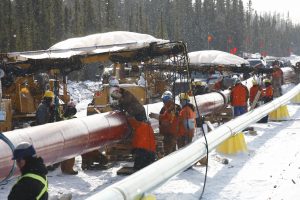 Energy East was to be a 4,500-kilometre pipeline that would transport up to 1.1 million barrels of crude oil per day from Western Canada to refineries and port terminals in Quebec and New Brunswick. It is estimated that Energy East would have created more than 14,000 high-quality skilled labour jobs over the seven-year construction phase and increase Canada’s GDP by approximately $55 billion.

The PLCAC co-ordinates, negotiates and administers more than a dozen collective bargaining agreements for the construction, maintenance and service of Canada’s mainline and distribution pipeline systems through a national labour relations committee and a partnership-based philosophy with four international building trade unions. For over sixty years, members of the PLCAC have built and maintained the majority of the National Energy Board’s 73,000 kilometers of regulated pipeline infrastructure throughout Canada.

In conclusion, Lane states “It is important to remember that pipelines continue to be the most responsible energy transportation solution and a significant contributor to Canada’s economy and everyone’s standard of living.  The cancellation of this project will take a heavy toll on Canadian pipeline construction jobs in communities across Canada.”