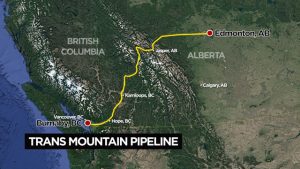 The National Energy Board (NEB) announced Friday that its Reconsideration report for the Trans Mountain Expansion Project (Project) has been completed within the 155 day timeline required by the Government of Canada, recommending the Project be approved. The NEB has put forward 16 new recommendations to the Government of Canada and if approved, will impose 156 conditions on the project.

The Reconsideration examined the considerable benefits of the Project, but also the impacts it will have on Project-related marine shipping associated with the Canadian Environmental Assessment Act, 2012 and the Species at Risk Act (SARA).

The NEB recommends that the Government of Canada find that increased access to diverse markets for Canadian oil; numerous jobs created across Canada; development of local and Indigenous individuals, communities and businesses; direct spending on Canadian pipeline materials; and a revenue boost to various levels of government, justify the approval of the Project.