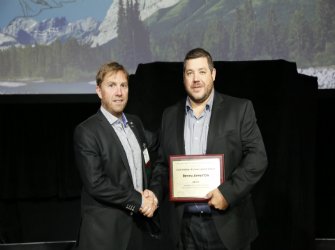 Bryan Johnston served as operations manager for Aecon at the time he was presented with the Jack Cressey Future Leader Award on May 17, 2017, at the PLCAC Annual Convention in Banff, Alberta.

In the award application made by Bryan’s employer it was noted:

“Both his team and his clients respond well to his style of leadership. He is always the first to redirect credit for his own successes to his team, but it is clear that his leadership has been a significant contributor to the growth of our business”, says Eric MacDonald, senior vice president, Aecon Utilities. “Through his lead-by-example style and his team oriented approach, Bryan has demonstrated the characteristics of a strong leader, positioning him to take on more and more senior roles in the Aecon organization.