In 2015, Aecon Group and the Six Nations of the Grand River Development Corporation formed a joint venture agreement. In three short years, the partnership has evolved into an industry-leading example of corporate Canada and First Nations partnership.

“A partnership of this nature, with a prominent company such as Aecon, exemplifies the capability of the Six Nations people to collaborate and participate in the economic opportunities that exist within the Haldimand Tract and beyond,” said Ava Hill, Chief of Six Nations Elected Council.

Six Nations of the Grand River is one of the largest populated First Nation in the country. Six Nations is comprised of the Mohawk, Seneca, Oneida, Cayuga, Onondaga and Tuscarora nations and provides untapped employment potential. So, working with Aecon Group Inc., a Canadian leader in construction and infrastructure development, was a natural fit for both parties, especially with their combined experience with providing integrated turnkey services to private and public-sector clients. 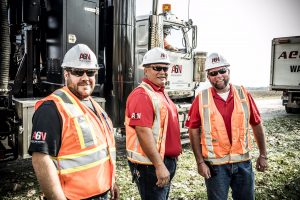 The proceeding venture was named A6N, with ownership split 51 per cent for the Six Nations of the Grand River Utilities LP, a wholly owned subsidiary of Six Nations of the Grand River Development Corporation, and 49 per cent for the Aecon Group. A6N is a construction based company which performs utilities-related work in southwestern Ontario, specifically within the Haldimand Tract; an area of historical significance to the people of Six Nations.

Bryan Johnston is the Operations Manager of A6N. “Our target and our objectives are to engage First Nations communities through employment opportunities allowing us to reach new demographics, new areas of untapped potential,” says Johnston. “We are a bolt onto Aecon Utilities and the type of work they do. A6N operates with 90 per cent First Nations employment rating, and the rest of the workforce is made up of experienced Aecon personnel such as lead hands and foreman.”

“He had a vision of getting the Six Nations community viable employment opportunities by partnering with a large corporation. When they approached Aecon, our senior leadership team got together and went over the model they saw fit, and it has ended up being a good working relationship right from the start,” says Johnston.

One of the groups’ highest profile projects, allowed the Walpole Island First Nation community in Southwestern Ontario to be connected to the Union Gas line. A6N was responsible for laying eight kilometers of 6-inch plastic and steel distribution gas line. Prior to the pipeline, the community was operating off various electric and propane sources.

“Most projects or contractors that come into town, attempt to hire local First Nation community members, however once the project is finished, those jobs are gone. That was not the case with A6N’s Walpole project, we were able to retain the majority of the workers and bring them along to their next project.”

By creating meaningful employment that instills pride, while offering the opportunity to develop new business opportunities, A6N shows that working together for a common goal creates comprehensive expertise, knowledge and resources for a wide range of utilities-related projects.

**The original article can be found at http://www.businesselitecanada.com/canadian-aboriginal/a6n-aecon-six-nations-joint-venture/