CPAC’s 2nd Annual “Day on the Hill” Another Success!

Oct. 23, 2017 – On Oct. 19, the PLCAC leadership team, in collaboration with leadership from its four pipeline union partners (collectively known as the Canadian Pipeline Advisory Council), participated in a second annual “Day on the Hill” at the Parliament of Canada in Ottawa, ON. 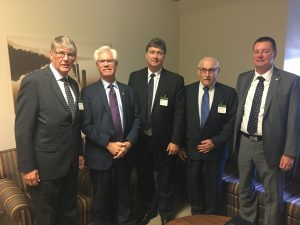 Again, the outreach was non-partisan with eight CPAC groups circulating throughout various Parliament buildings to meet with Members of Parliament (MPs) and Senators, including Ministers. A major discussion point was the cancellation of the Energy East Pipeline Project and the implication of that decision on the thousands of jobs in the pipeline construction sector. Representatives also touched on awareness and education about the innovations, processes and practices of modern pipeline construction, service and maintenance and how the pipeline workforce is sourced, trained and developed.

This year, preliminary data shows that a total of 66 in-office briefings went ahead during a busy day of parliamentary proceedings. “Day on the Hill” teams, consisting of small groups of union and management partners, met with a total of 54 MPs and 18 Senators from the major parties as follows:

In addition, 7 other designated public office holders and 13 other supplementary staff members took part in various meetings. And during an evening meeting reception, CPAC was able to reach an additional 6 MPs, 1 Senator and several more key staff.

Teams were received with much interest and outward appreciation for the information shared both verbally and in a detailed “leave behind” booklet. Many MPs and Senators made specific requests for further information and those follow-up tasks are a priority for PLCAC staff.

For a PDF copy of the booklet, click here.