Indigenous Services Minister, Seamus O’Regan, highlighted the $21 Billion commitment to Indigenous service initiatives over the next five years that were in the recently announced Liberal government’s 2019 Budget. 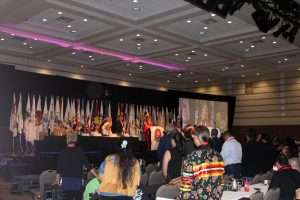 Green Party Leader, Elizabeth May, re-affirmed the Green’s mission is to eliminate fossil fuel use by rapidly converting to renewable energy sources.

The Honourable Carolyn Bennett, Minister of Crown Indigenous Relations, recapped her long career in Indigenous affairs roles and the commitments to improvements that the government of Canada is undertaking. In a light-hearted moment, Minister Bennett reflected on a visit to a First Nations community where an Elder expressed disappointment in meeting her because he thought he would be meeting the comedian Carol Burnett.

On pipelines, Chief Bellegarde recently said: “Canadians are divided, premiers are divided, chiefs are divided”. Bellegarde said projects like the Trans Mountain Expansion will always be a controversial issue, especially in the Indigenous community. At least one group wants to buy the pipeline, while others would rather see it not progress. “We’re all too dependent on fossil fuels. We know that, but you can’t turn the tap off tomorrow morning,” Bellegarde said. “We need to balance the environment and economy.”

Several of the delegates wondered if the 2019 election outcome would resurrect discussions of an oil pipeline to Canada’s Atlantic coast. This will surely be a topic of debate when next year’s AFN general assembly returns to the Maritimes in Halifax, NS.