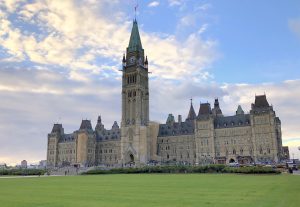 The PLCAC participated in a third “Day on the Hill” in Ottawa on October 17 and 18, 2018. Planned and conducted as a joint union-management activity with our union partners from the Operating Engineers, United Association, Teamsters Canada and Labourers, through the Canadian Pipeline Advisory Council (CPAC), it was highly-successful with over fifty meetings.

Steven Schumann, Canadian Government Affairs Director for the International Union of Operating Engineers (IUOE), who has been working on Parliament Hill for over a decade, noted: “The government officials need to be reminded that PLCAC contractors and their labour partners have built the majority of NEB-regulated pipelines in Canada and are well-prepared to build the next ones as well.”

The joint lobby is a unique partnership with 24 senior leaders of the PLCAC and the four craft unions to the Pipeline Agreements of Canada set up as eight union-management teams, visiting officials in English and French. Open to meeting with all parties, the teams circulated across Parliament Hill taking part in meetings with various members of parliament and senators (34 Conservative, 21 Liberal and 3 NDP).

The PLCAC approach to lobbying is one of myth-busting and fact-sharing, to build awareness and familiarity with modern pipeline construction and maintenance practices, from the folks who have built and maintain most of the 73,000 kilometers of National Energy Board (NEB) regulated pipelines throughout Canada. The awareness-building materials we use with public office holders and officials are available in English and French to PLCAC members at the Industry Information link at pipeline.ca.

A major discussion point of the day was Canada’s need to get its crude oil to tidewaters. Gaining ocean access will decrease the unbalanced economic dependence on the USA and could reduce Eastern Canada’s dependence on oil imports from countries with questionable human rights practices. The Federal government’s purchase of Trans Mountain Pipeline and the recent Supreme Court ruling against the Trans Mountain Expansion Pipeline project had support and opposition along partisan lines. Interestingly, resurrecting the Energy East project to supply oil to the Quebec and the Maritime provinces was discussed in several of the meetings.

A second concern was raised regarding the length of time, costs, risks, and uncertainties of the current pipeline approval regulatory process and how the proposed changes outlined in Bill C-69 could make that process even more problematic.

The government officials were interested to learn more about how PLCAC members focus on environmental protection, health, and safety of our employees and encouraging Indigenous, youth, and women into pipeline careers. They also expressed support of our self-funding industry model which provides for ongoing skills development and delivers excellent wages, health, and pension benefits for the pipeline craft employees.

The PLCAC and its union partners have been supporting elected officials to find practical solutions to policy issues since 1971, when we first came to the table as stakeholders to the historic northern pipeline project applications. As our country heads into the 2019 federal election, we will continue to support elected officials as they redouble their focus on getting new pipelines approved and constructed for the benefit of Canadians, with our highly skilled workforce as the builders of choice.